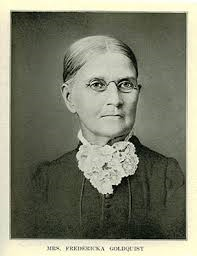 I chose this week to write about my 3rd great-grandmother, Fredericka Peterson Goldquist, on the theme of "plowing through."  Fredericka was an immigrant from Sweden, having been born there in the town of Hagersda in 1824. She came to the U.S. when she was 23 with her parents and siblings. Their destination was Knox County, Illinois, where she lived for the rest of her life. While they were traveling through the Erie Canal many of them contracted cholera. Fredericka's mother and brother both passed from the disease, but Fredericka, even though she constantly tended to the sick, never became ill with it. Even a doctor who later took care of others in her group fell ill and died. This seems to be a theme in Fredericka's life. The History of Knox County, Illinois has a short piece on her, and says many times how she devoted her life to the care of others. She married to Claus Olofson Goldquist and with him had five children, who were left to her sole care when he passed away when still quite young. Even through this she gave so much of her time to others. The piece on her says, "When one attempts to analyze the secret of Mrs. Goldquist's usefulness, he finds it in her sincere faith in Christ and in her desire to serve Him by ministering through every possible, accessible channel, to mankind." She was an active member of the Soldiers' Aid Society during the Civil War and was a ward visitor for many years through The Dorcas Society. In addition to this, she taught a Sunday School class for 35 years, which was so popular it was often crowded. When Fredericka passed away in March 1889, it was said at her funeral that "her career can be said to be worked like golden threads into the better natures of hundreds of men and women here."
Posted by Katie Andrews Potter at 2:32 PM